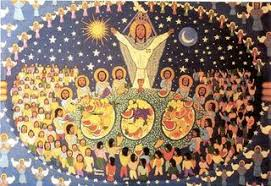 The Rector will be away from Saturday, October 21st -27th.  In the event of an emergency, please contact a warden via the parish office.  The phone will be checked for messages.

Concert and Tea November 18th - On Saturday afternoon, November 18th at 1:30pm, St. Helen's is pleased to present our organist and choir director, Mr. Mathew Ma in concert with Soprano, Lambroula Pappas.  Tea in the upper hall the concert.  Both the concert and tea are included in the ticket price of $15 per person.  Tickets will soon be available.  This is a great opportunity to invite friends and family.  We are counting on the congregation to get the word of this wonderful musical event out and around in support of St. Helen's music programme.

St. Helen's Chicken, Beef, Seafood, Appetizer, and Much More Fundraiser is underway! Please bring in your order forms with payment by Sunday, Oct 29th.  Your order will be ready for you at the church on Sat, Nov 4th at 10:00 am. Please consider sharing an order with another person if the size seems too much for you.  Zip Lock bags will be supplied on pick up day. Contact Kelly Foulds or Lynn Turner for further information.

Church and Hall Heating Systems and Electrical Work - A message from the Wardens and Treasurer: Over this year our heating systems in the church and in the hall have had to have repairs well above the amount allowed for in our budget.  Both the furnace and boiler have kept up with our heating needs very well but, from time to time, they do require more than the simple regular maintenance.  This has been the year for that extra maintenance.  In addition, the church has required some electrical work to be done particularly for the vestry area.Â  We are asking everyone at St. Helen's to make an extra donation in order to meet the costs of these repairs.  The funds from our regular giving envelopes, Christmas Bazaar, and other fundraisers etc. between now and the end of the year are already allocated to meet our budget.  We are asking for donations over and above your regular giving to meet this need of about $3000.  Please mark your envelope 'Special Appeal'.  We know the people of St. Helen's always step up to the plate when asked.  So thank you in advance for your generosity.

Perfumes and Scents in the Church and Parish Hall  In recent years we have all heard of the problems associated with breathing and the triggers that cause people real difficulties.  In the last year, a number of parishioners have approached the wardens and rector in reference to their own difficulty breathing.  The difficulty comes when members of the congregation, including both men and women, are wearing scents, colognes, and perfumes to church and other events in the parish hall.  For some people, the throat begins to close or constrict and breathing become can become severely restricted.  This, of course, is quite serious, very scary, and can easily lead to a medical emergency.  It has nothing to do with disliking a particular fragrance or scent.  The church council discussed this concern at its meeting on September 19th.  The result is that the council is requesting members of the congregation, of their own volition, to refrain from using perfumes, colognes, and scents so that others who are easily affected may breathe easy.  We hope everyone will be understanding of this.

Jam time - Don't forget our Christmas Bazaar will be held on Nov 25th.  It may seem like a long way off but time has this habit of whipping by!  Now is not too soon to begin preparations. With all the wonderful fruits and vegetables in season please think of the pantry stall. Jams, jellies, pickles, relishes, chutneys etc. are all needed and welcomed.  Thank you!  If you have jars or need jars speak to Jacquie Stinson.

The St. Helen's International Parish Dinner has been postponed and will be held in late January. Our timing is a little tight to hold it this fall.

Hymn of the Week - How Great Thou Art
A poem was written in 1885 by a Swede, Carl Boberg.  Over the years it has been translated and transformed to what we have now, in English.  Carl Boberg and some friends were returning home to Ma from Kronoback, where they had participated in an afternoon service. Presently a thundercloud appeared on the horizon, and soon lightning flashed across the sky. Strong winds swept over the meadows and billowing fields of grain. The thunder pealed in loud claps. Then rain came in cool fresh showers. In a little while the storm was over, and a rainbow appeared.  When Boberg arrived home, he opened the window and saw the bay of Ma like a mirror before him ... From the woods on the other side of the bay, he heard the song of a thrush ... the church bells were tolling in the quiet evening. It was this series of sights, sounds, and experiences that inspired the writing of the song.

Teresa of Avila was a Spanish nun of the sixteenth century whose visions of Christ and gifts as a spiritual director have placed her among the greatest of all Christian mystics. She was the only daughter of a minor nobleman and entered the Carmelite convent in her native town of A'vil-a when she was twenty-one. Over the next two decades she endured many illnesses, one of which left her paralyzed, and also a nagging sense that in her prayers and devotions she was doing nothing more than treading water. Then, in answer to her despair, she began to have visions and hear interior voices. The most famous of these experiences, known as transverberation of the heart, took place over a number of days in 1559. At her left side Teresa beheld an angel who held a golden spear with a flaming tip, with which he pierced her heart again and again. Teresa later wrote that each time the angel withdrew the spear she was left completely afire with a great love for God, and knew that her soul would never be content with anything less than God. Three years later, in obedience to another vision, Teresa left her convent with thirteen other nuns to observe the primitive constitutions of the Carmelite Order in all their strictness. Despite fierce, sometimes violent opposition from the Carmelite establishment, Teresa eventually founded sixteen other Reformed Carmelite houses. In the midst of her other concerns Teresa also found time to write a number of books, which reflect her holiness, wisdom, and sense of humour; and through them she has become one of the most widely loved saints in the Church, attractive even to those who have not shared her Spanish catholicism or her monastic vocation.

John of the Cross was the greatest Spanish mystic of the sixteenth century, and his writings still nourish modern Christians in their hunger for true experience in the spiritual life. John was born in 1542 and became a Carmelite friar at the age of twenty-one. Four years later he met Teresa of Avila and joined in her reform of the Carmelite Order, serving as confessor to Teresa's nuns. His prominence in the reform-movement made him a target of intrigues; twice he was abducted and imprisoned. After Teresa's death he also suffered vindictive treatment at the hands of his own superiors in the Reformed Carmelites, and their harshness contributed to his death in 1591.  Through all his trials John was sustained by an intense mystical love for Jesus Christ. Like Teresa, he experienced the presence of Christ in intellectual visions. His reflection upon these experiences issued, first of all, in poetry of extraordinary power and beauty. At the urging of his disciples, he selected a number of his poems and produced prose commentaries on them, which have become classics of mystical theology. John united the vocation of a theologian with the experience of a mystic, and his writings are the supreme example of theology as the fruit of prayer.